Only a couple more weeks until ‘Kill The Hunted’  drops on 11/11 and the excitement is building! Check out our brand new ‘Kill The Hunted’ video on YouTube and digital single on all the digital platforms. Read the official press release for the full lowdown:

Re-charged Orange County CA metal mavens LEATHERWOLF have released a video for the title track of their forthcoming new studio album, ‘Kill The Hunted’, set for release November 11 via N.I.L.8 and Rock of Angels in North America and Europe, respectively, November 14 through Hellion Records in South America, and November 17 on Rubicon Music in Japan.

Showcasing the band’s innate ability to create hard driving anthemic metal, ‘Kill The Hunted’ was conceived in 2008 by drummer/producer, Dean Roberts, but not revisited and completed until some ten years later after the band fractured in the wake of a short European tour. “I starting writing the lyrics in 2018, prompted by what led to the split with our old singer. So the song is very personal to me but it could apply to anybody in a simliar situation,” reflects Roberts. “The lyrics are really about self-discovery – discovery about all the negative stuff that was around me. And that I had to do something about it and make a change. The second verse, “I can feel the darkness that surrounds me / killing everything that I create / wasteland’s rule by death and the forsaken / bind and tie the blood that runs within” speaks to those feelings. In the final verse, the song conveys a more positive, self-empowering tone though. I gotta give props to Rob (Math) and Keith (Adamiak) who helped finish the song in the studio and helped me telling that story to myself. It really made me realize that I needed to move on.”

The ‘Kill The Hunted’ single is now available on all major digital platforms (see links below) and is the follow-up to ‘Hit the Dirt’ and ‘The Henchman’, the latter featuring a guest appearance by Whitesnake‘s fleet-fingered axe wizard, Joel Hoekstra. Lyric videos for both can be found here: https://youtu.be/LhsNAMJFN-Q and here: https://youtu.be/z9LoCaOvOjA

The ‘Kill The Hunted’ album art T-shirt & CD bundle can be pre-ordered from IndieMerch in North America https://leatherwolf.indiemerch.com/item/125832 and Rock of Angels in Europe: https://www.roar-records.de/Vorverkaeufe/Leatherwolf-Kill-The-Hunted-CD-Bundle::68417.html. The eye catching album cover artwork was created by Marc Sasso whose credits include Dio, Halford, and Rob Rock. 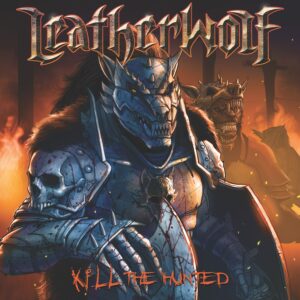